Former Barcelona captain and club’s sporting director at the moment, Carles Puyol, remembered the days when he was starting his professional career. According to his words, he was very close to signing for Malaga just before he got a chance in the first team.

‘Frank de Boer and Michael Reiziger were in front of me. I remember, Barcelona had accepted an offer from Malaga that year, but I refused to leave, since I wanted to make a mark in my favorite club. Wish was even bigger when my best friend, Xavi, made a debut. Career of mine had a few breaking-points but I would always remember that summer. Just after I had decided to stay, Louis van Gaal involved me in a first-team football and that’s how it all began.’

Seven months after retiring, Puyol claims that he is not feeling comfortable out of the football field and often dreams about getting back. ‘That’s my dream. I miss playing football and training, I have to be honest. But I can’t play for now because I am still recovering from a knee injury that finished my career. It’s better with every new day, I am recovering step by step, but in the moment of retiring, I couldn’t even walk, it was very painful to do even everyday activities.’ 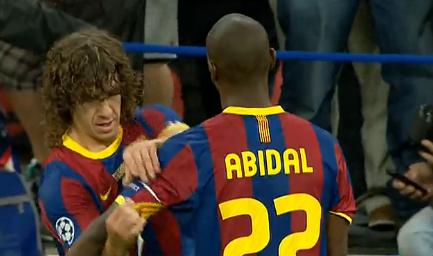 He also discovered a detail that makes him very proud. ‘I was recovering from a knee injury just before the CL final against Manchester United. I have had just a few days to prepare for a match and in discussion with club I suggested that Eric Abidal should lift the trophy in case we win. That is the thing that makes me proud the most.’

La Liga - Round 7 - All the Goals - Highlights Reel